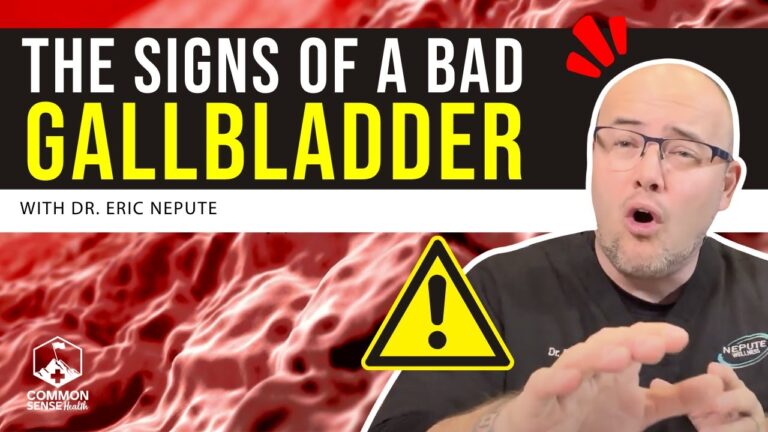 Does My Gallbladder Have Issues?

Hope you’re having a great day today. I had a couple minutes between patients, and I wanted to tell you something that we’ve been ssing a lot in our practice recently. If you have some of these common symptoms: abnormal stool, weird coloring in your eyes, recurrent neck pain, mid back pain, even some low back pain, fevers, chills, diarrhea, constipation, nauseousness, a pain after you eat, high blood pressure… You may have liver stress and gallbladder problems that you don’t even know about. This is a very common problem.

You need to understand that gallbladder dysfunction is one of the most common problems in healthcare today. Unfortunately, it’s also one of the most misunderstood problems. Clinicians frequently refer to the gallbladder as an organ that you don’t even need. They’re all about cutting it out.

Gallstones are ectremely common. The reports are saying 25 – 44% of the population gets these things. Gallstones usually do not cause symptoms. Three major studies have shown that in 3000 patients, 67% of the confirmed cases of gallstones were asymptomatic. Meaning they were jacked up but didn’t feel it.

Bottom line is most doctors don’t really deal with this. An acute gallbladder attack should be used as an indication for surgery only, not an incidental finding. A lot of times you’ll find a gallstone on accident and they’ll say they’ve got to go in and remove your gallbladder. No.

There’s one main thing that happens with metabolism that screws up the bile function. You’re not producing enough enzymes. Please listen to me when I say this. Vitamins, minerals, and nutrients are the basic fundamental building blocks of your body. It’s the raw materials that your body needs to repair and heal itself.

If you have just one of these 3 things, you are going to be deficient in enzymes. Number one is stress. Number two is if you are eating the standard American diet that is filled with non-living foods. So foods that have stuff in them that will destroy your body’s ability to produce these enzymes. And the third thing is certain medications that people take.

There are 3 enzymes. Amylase, lipase, and protease. If you’re deficient you can’t digest fat, carbs, or proteins. Think about your body as a car getting gasoline. It goes into the tank in order to be fed into the engine. However, there’s some problem that’s not allowing the gas to get to the engine. If you’re deficient on enzymes, your body is taking in food, but doesn’t have the means to convert it to energy for the rest of the body.

That’s why Digest is so important. We combine digestive enzymes that have amylase, lipase, and protease. They are blant based enzymes. We pair it with detoxification nutrients. I’m a big fan of Clifton Light zeal and many other things. These two together have helped us get the bile thin in our patients, and helped thems to stop having gallbladder attacks.

Stop chasing your symptoms and start fixing the cause of the problem. Here’s what I recommend. Number one, change to a Mediterranean diet. Start practicing intermittent fasting where you only eat two meals a day. Put pink himalayan salt or a lot of gray Celtic salt in your diet. About half a teaspoon throughout the course of the day. Drink half your body weight in ounces of water a day with a squeeze of lemon in it to make that water alkaline. So the body can digest and heal and reduce inflammation.

Stop chasing your symptoms and start fixing the cause of the problem. Get on a Mediterranean diet, practice intermittent fasting, and drink lots of water.

So stop getting that gallbladder removed. That’s the last thing that needs to be done. You need to be on a digestive enzyme. We tell people to take one or two of these Digest with each meal. It’ll digest your food. Combined with Warrior Water, we put these together because this helps reduce inflammation.

So many people are filled with toxin. They’re toxic. TOX-SICK. This is something that can be taken every day. The Digest and the Warrior Water taken together will help with that.  We do the best we can to put the information out there. Hope you’re having a blessed day wherever in the world you are. Until we meet again, I’m Dr. Eric Nepute. God bless America and God bless the world. I’ll see you soon everybody.

Ask Me A Question

I’m planning future lives and want to make sure to talk about what people want to hear. Ask me a question and I’ll answer them soon!